The Imperial Palace in Beijing, China, was initially constructed during the Ming dynasty between 1406 and 1420 AD. The palace was home to 24 emperors between 1420 and 1924. It is listed as an UNESCO World Heritage Site along with the Imperial Palace in China's Shenyang city, under the name, "Imperial Palaces of the Ming and Qing dynasties." During imperial China, foreigners and common people rarely could enter the palace and even then were restricted to the lesser buildings. Even state officials had to leave the palace at night, leaving only eunuchs, as servants, in the palace. This closed door policy earned the palace its pseudonyms as the Forbidden Palace or Forbidden City. It is known in Chinese as Gugong (故宫) which translates as 'Former Palace'. Today the one time Forbidden Palace is open to the public and one of China's foremost tourist attractions.

Covering an area of 720,000 square meters (just under 2.6 million square feet), the Imperial Palace can lay claim to being the largest palace complex in the world. It's often said that since there are 10,000 rooms in heaven, the Emperor, who is the Son of Heaven, should have 9,999. The true number of rooms is considerable less than this but still counted in thousands. The palace has been adapted over time and many sections were destroyed the during the last century. Since the last Emperor left the Palace it has been maintained as a museum. In total 980 buildings with 8,707 bays or rooms remain.

The City of Beijing 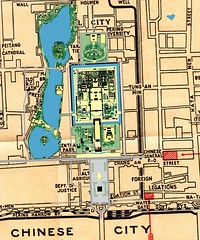 The Imperial Palace is the centre part of the ancient Imperial City of Beijing. The whole city was planned around the Palace. It is oriented on a north-south axis, albeit slightly skewed anti-clockwise. It is the same axis as the older Yuan dynasty palace that was sited just north of the current palace and had been destroyed by the first Ming Emperors. The old Yuan dynasty palace was sited around where Beijing's Drum and Bell towers stand today.

The Imperial Palace is rectangular. It is surrounded by a 7.9 metre high palace wall with Towers on each corner. A 3,800 meter long and 52 meter wide moat encircles this wall. Within the palace walls was the so-called Forbidden City, the home of the Emperor. Outside the Palace lay the Imperial City. It was there that the administrative buildings were sited and the privileged lived. The Imperial city was surrounded by strong city walls. There were four gates, one on each side of the Imperial City. These are Xi'anmen (West), Di'anmen (North), Dong'anmen (East) and Tian'anmen (South). The Imperial City also contained gardens and lakes. Many of these remain as parks today. 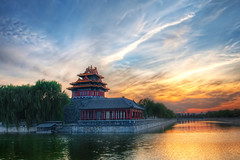 Beyond the walls of the Imperial City lay Beijing's Inner City. This was where the normal people lived and worked. Like the Palace and Imperial City, the Inner city was set out in a rectangular form such that the Palace was almost in the centre of the whole city. Another large City wall enclosed the Inner City. Nine gates controlled access in and out of the city: two each north, east and west with three to the south. In the south of the Inner City, between the Tian'anmen gate of the Imperial city and the Zengyangmen gate of the Inner city, a finger of the Imperial city extended. The south is the main entrance to the Palace and the Cities, following Chinese customs, so the Southern approach to the Imperial City was set between official buildings. Two additional gates lay Between Tian'anmen and Zengungmen. The southern of these was the Daqingmen gate. Then there was the Gate of China (formerly the Great Qing Gate or Great Ming Gate). To the south of the Inner City lay an Outer City, again encircled by another set of city walls. The Outer city was intended to go all the way round the Inner City but only the southern section was completed. In the early 1950, much of the old city walls of the Inner city and Imperial city were destroyed to allow traffic to enter and exit the city freely. The Gate of China and the southern spur of the Imperial palace were demolished to form the modern day Tian'anmen Square. Many of the old Gates remain or have been reconstructed but they stand isolated without the great walls that once liken them together.

The Palace can be divided into two main sections. The Outer Court, approximately the southern half of the Palace, was used mainly for ceremonial purposes. The Inner Court, occupying the north of the site, was for the most part the residential area. As you approach the Palace on the main entrance route from Tian'anmen Gate in the south, you first encounter the Meridian Gate 午门 (Wǔmén) . This large imposing barrier consists of five buildings and so is sometimes known as the Five Phoenix Towers. The gate has five doors or arches in it. The central arch was for the explicit use of the emperor himself. Even his wife was only allowed to use this door on the special occasion of her wedding. The top three students for the Imperial Examinations were also allowed to exit the Palace through the centre gate on their graduation day. At all other times, people had to use the side arches. The two arches closest to the emperors' arch were for the higher ranking officials while the extreme left and right hand arches were for ordinary people. 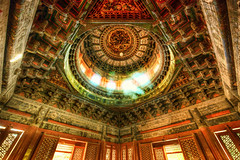 On passing through the Meridian Gate, we enter the Palace's Outer Court. Five arched bridges take us over a snaking moat and on to the Gate of Supreme Harmony 太和门 (Tàihémén). This gate is raised on a platform with steps leading to and from it. There are three arches in this gate. As before the centre arch was reserved for the Emperor. To either side of this gate lie the two lesser gates of Zhendu Gate to the west and Zhaode Gate to the east. As before, these side gates were for use by the common people.

Now we come upon the first of the major buildings of the Palace - The Hall of Supreme Harmony 太和殿 (Tàihédiàn). This is the largest building in the Imperial Palace. It is 9 bays wide and 5 bays deep - the numbers 9 and 5 were symbolically connected to the majesty of the emperor. The building is set on a three tiered marble base. Including the base, it is 30 metres tall. This makes it the largest wooden building in all China. It was here that the emperors' main throne was sited. the six pillars nearest the throne are covered in Gold. The throne has five dragons around the arms and back of the chair. Behind the throne is a screen depicting another nine dragons. This building was used for the highest state occasions. This included the emperors' coronation and weddings. The emperors also held court here throughout the Ming dynasty, though in the Qing dynasty, court was more often held in the Inner Court of the Palace. Behind this lay the other two main buildings of the Outer Court. the first of these was the Hall of Central Harmony. This was used to rehearse ceremonies as well as for the announcing of the results of the Imperial Examinations. Behind this lay the Hall of Preserving Harmony which was used by the emperor to rest and get prepared prior, during or after ceremonies. These two lesser halls also contained Imperial Thrones though of a more modest scale to that in the Hall of Supreme Harmony. These three buildings make up the central axis of the Outer Court of the Imperial Palace. To the east of the central axis is the Hall of Military Eminence which was used by the emperor to converse with ministers and occasionally hold court. To the west is the Hall of Literary Glory. This building housed the Imperial printing press. Also in the Outer Court is the Southern Three Places (南三所). This collection of buildings formed the residence of the Crown Prince. 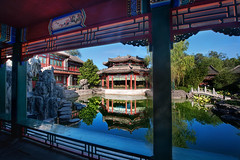 The main residence consists of three buildings set out north to south along the central axis of the Palace. They are enclosed by a wall, separating them from the other areas of the palace and so making them more private. The entrance into this area is through the Gate of Heavenly Purity. As you approach from the south you first encounter the Palace of Heavenly Purity 乾清宫 (qiánqīng gōng). A raised walkway takes you from the Gate to the single level white marble platform on which the palace building stands. The building is a large two level structure with a double eve roof. Inside it is divided into nine rooms. During the Ming dynasty, the Emperor slept here. There were twenty-seven beds in the palace. For security, the Emperor would randomly choose a different bed each night. Early in the Qing dynasty, the Yongzheng Emperor, not wanting to live in the same hall which his father had used, moved his sleeping quarters to the west side of the Inner Court to the Hall of Mental Cultivation. The Palace of Heavenly Purity then became an audience chamber where the Emperor could hold court and staged banquets. Later emperors continued Yongzheng's practice. A secret copy of the emperors' will, detailing his successor, was kept in this Palace building. The will was hidden behind a tablet behind the throne. On the tablet were the words "Justice and Honour." which in Chinese is written, "正大光明." (zhèngdàguāngmíng). A second copy of the will was kept on the emperors' person at all times.

Immediately behind (to the north of) The Palace of Heavenly Purity lies the Hall of Union (交泰殿). In here, a relatively small square building, were stored the twenty-five imperial seals of the Qing dynasty as well as the Imperial clock. This originally was a water clock but later a mechanical clock was installed here too. Beyond the Hall of Union is the Palace of Earthly Tranquility （坤宁宫）. This large building is, like the Palace of Heavenly Purity, a double eved building. It is nine bays wide and three bays deep. It was the residence of the Empress during the Ming dynasty. In the Qing dynasty, Shamanistic worship became part of the Imperial lifestyle and the Palace of Heavenly Purity was converted as a place for this worship. The front part of the hall featured shrines, icons, prayer mats, and a large kitchen where sacrificial meat would be prepared. It was also in this hall that the Emperor and Empress would spend their wedding night together.

The remaining area in the north of the central access is taken up by the Imperial Gardens. The areas to the west and east of the central axis, within the Inner Court, contained many small buildings in which the Imperial concubines and their children were accommodated. The western edge of the Palace complex contains the Palace of Tranquil Longevity. This is an almost exact duplicate of palace's main central axis buildings, in minature. It includes its own cerimonial throne rooms and accommodations divided into southern outer and norther inner courts. The Palace of Tranquil Longevity was constructed by the Qianlong Emperor as his residence after his retirement. 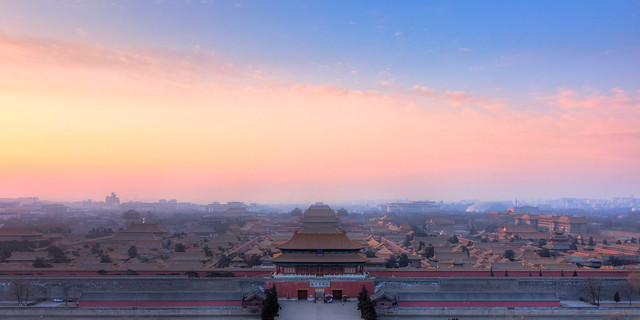 Directions: Located at the north end of Tian&apos;anmen Square in the very centre of Beijing city.

Description: Once the home of the Emperors of China the former palace is now a major tourist attraction. This gigantic site has been preserved and recently heavily restored so as to give a true impression of its historical splendour.